You are here: Architecture and BIM1 / Jewel Changi: the spectacular Singapore airport designed with BIM

The BIM based development project of Singapore airport: a new lounge with a huge greenhouse and the highest artificial waterfall in the world

The Jewel Changi, or “jewel airport” is the latest in a series of futuristic airport projects and a lifestyle hub.

Singapore’s Changi International Airport was conceived as the main aviation hub of the thriving city-state south of Malaysia (one of the world capitals of finance) and is recently undergoing a major expansion and redevelopment process.

The newly refurbished shared public space, which connects various terminals, is characterized by a large tropical garden covered by a ring-shaped glass dome, with the world’s highest indoor artificial waterfalls running through from the centre.

The design, construction and management of the building, and in particular of the complex roof structure, were made possible thanks to the use of BIM based processes. In fact, BIM allowed absolute control of the entire construction process of the new building (which was built inside an airport that has always been kept functional!).

Needless to say, that the BIM tools allowed to simulate the visual interference between the large cranes that were used to build the roof and the airport control tower. 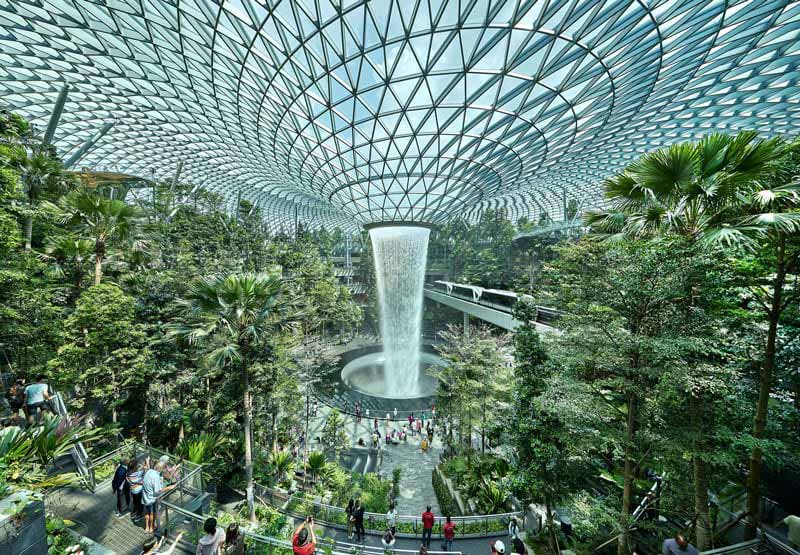 Changi International Airport: the waterfall immersed in the tropical garden

The Jewel Changi building is divided into two main blocks: 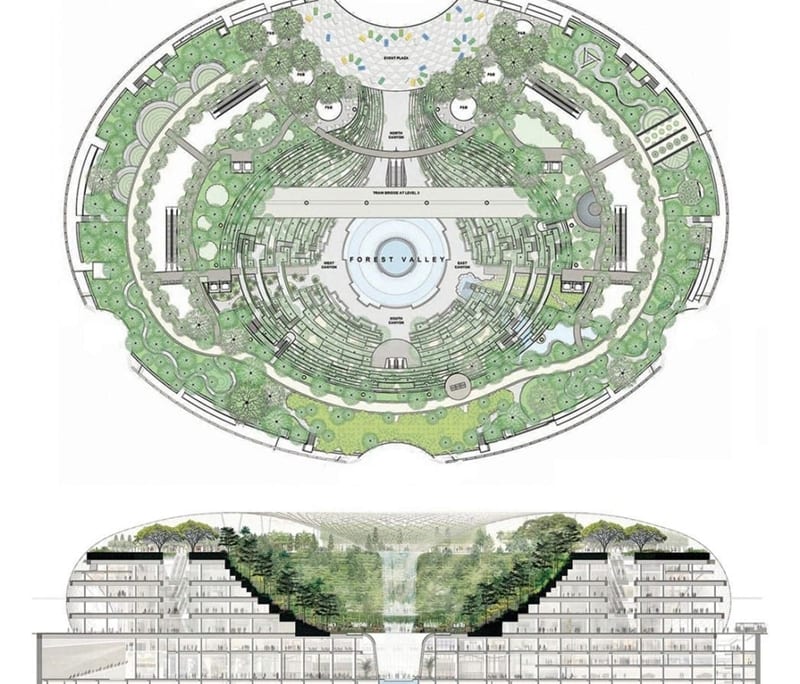 Undoubtedly this area represents the airport’s wonder thanks to its impressive features: 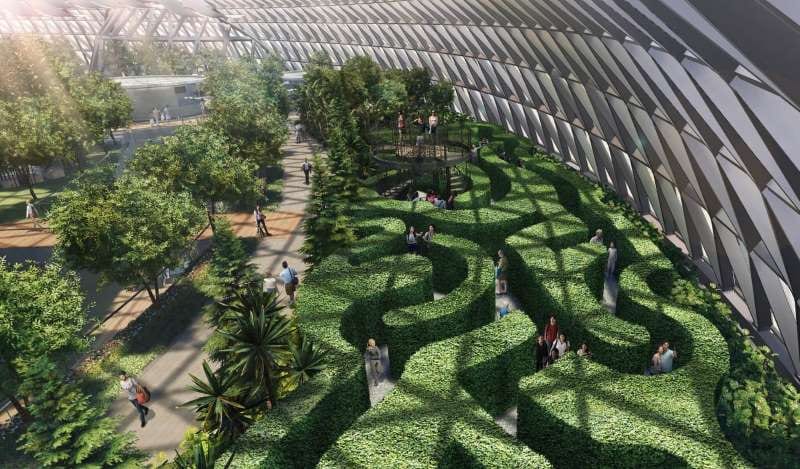 The team of designers was led by architecture and design studio Safdie Architects, and saw the participation of the structural engineers of BuroHappold and a group of important international collaborators. 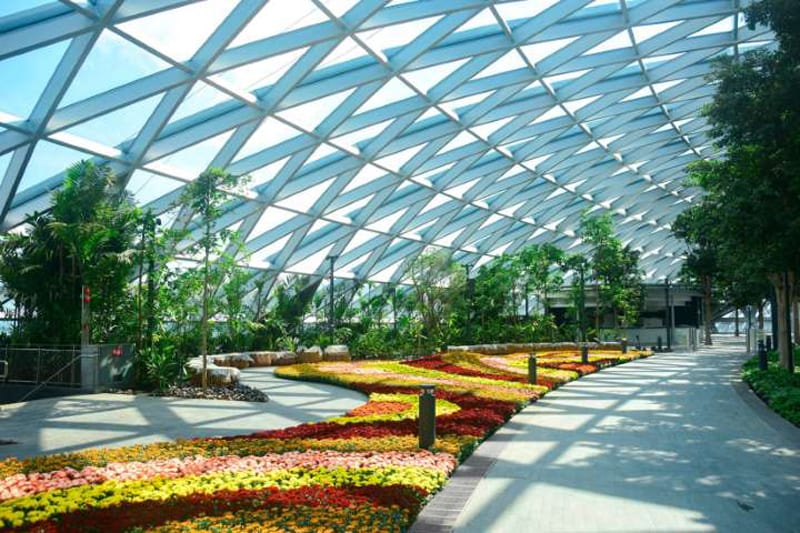 The glass and steel mesh roof of the Jewel Changi

The jewel of Singapore airport is the Jewel Changi glass roof, a true engineering marvel.

Consisting of a gridshell structure (a reticular structure), unique in its kind, it features an ovoid toroid shape, 200 meters long and 150 meters wide, with a central opening of 12 meters for the internal waterfall, known as Rain Vortex.

The roof is supported on the internal perimeter by 14 tree-like columns. These columns together with the ring beam as its edge, allow to free the entire large greenhouse / garden from further structures and volumes. 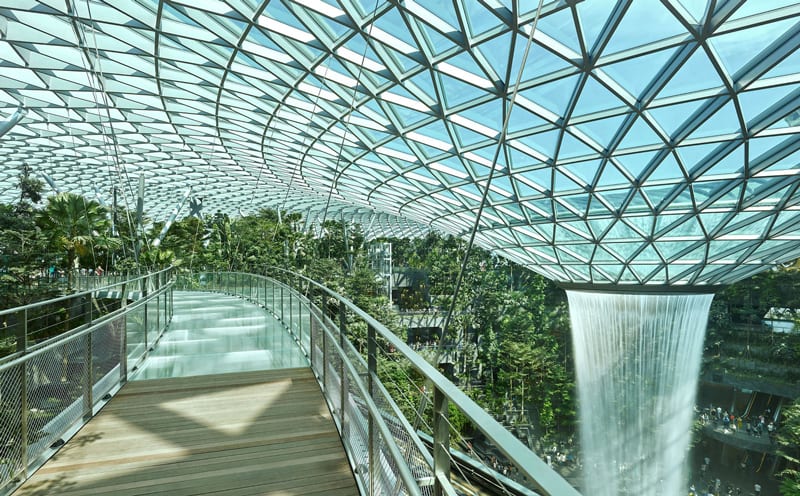 The gridshell structure of the roof

The Rain Vortex is 40 meters high and is the world largest and tallest indoor waterfall. It can supply 37,850 litres (10,000 U.S. gal) of water per minute. The rainwater collection and recycling system first uses water for the waterfall and then for irrigating the garden. 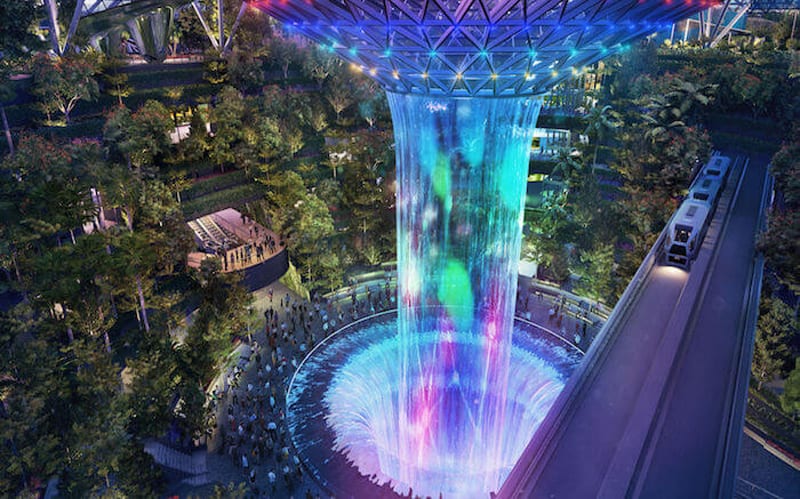 The Rain Vortex waterfall and the shuttle bridge to the terminals

The BIM project of Singapore airport

Building Information Modelling (BIM) has been an indispensable tool for planning and developing the construction stages of Jewel Changi.

The very complex shape of the glass dome was conceived using BIM from the beginning. The entire project development, and the subsequent design review process were also based on BIM practices.

BIM was then used to define the maintenance program and to plan the impact of the construction site on airport traffic, which remained in operation during works.

Furthermore, it was also possible to simulate the view impact of construction cranes from the control tower: before cranes were mounted, BIM was used to ensure that they did not obscure the tower’s visibility on the airport runways.

The BIM execution plan (BEP – BIM Execution Plan) has been outlined since the beginning of the project, defining the roadmap for the use of BIM in different phases. The compliance of what was accomplished with BEP was then verified with respect to the construction scheduling.

BIM was a fundamental tool for this project because the construction of the Jewel took place in the difficult context of a busy airport. In addition, Jewel is physically connected to Terminal 1, which will be further expanded in the future as part of the overall airport development project. 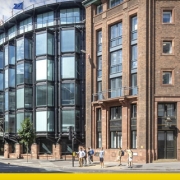 The BIM renovation project of the London Financial Times headquarters 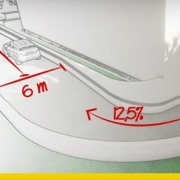 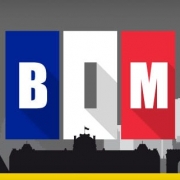 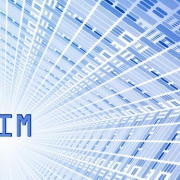 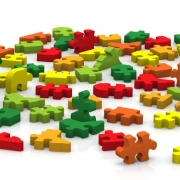 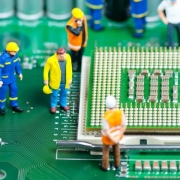 The impact of BIM on new professional roles 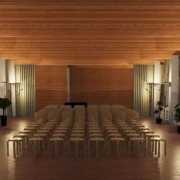 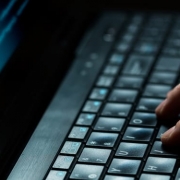 Information classification and coding in BIM processes
Subscribe to our Newsletter