The photovoltaic system diagram is the fundamental design asset for installing an efficient solar energy system. Find out everything you need to produce these important design elements without encountering any drawbacks

It’s fundamental to be able to size all system components as it affects the productivity and efficiency of the entire system. To be sure that you have control of all variables involved, I would suggest you use a reliable solar PV calculator software, which can assist you during all the design phases and guarantee insights into simulated system performance.

What is the photovoltaic system diagram?

The photovoltaic system diagram is an ideal representation of the system. See the figure below for an overview of the main components. 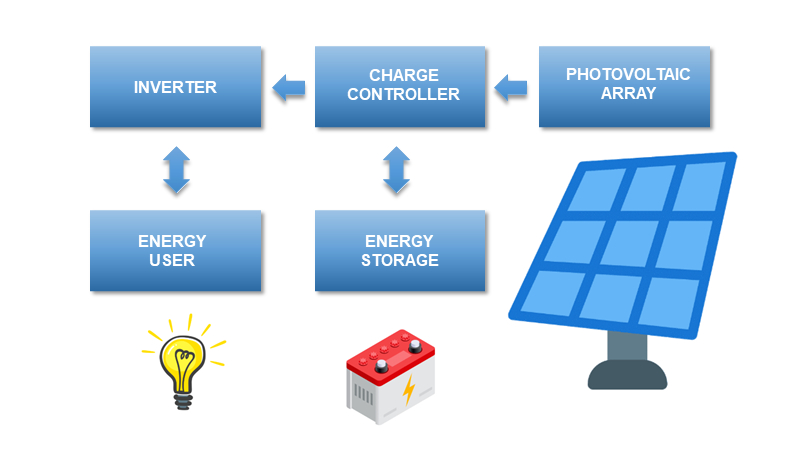 General diagram of a photovoltaic system

Nowadays, correctly sized photovoltaic systems should include the possibility to self-consume the produced energy, to exchange it with national grid or store energy which can’t be used (also known as not self-consumed) it in accumulators so that the energy can be absorbed even when the PV system is not operating, for example at night.

For a correct operation of the photovoltaic schema based on the on-site exchange mechanism, we need three precise measurements: 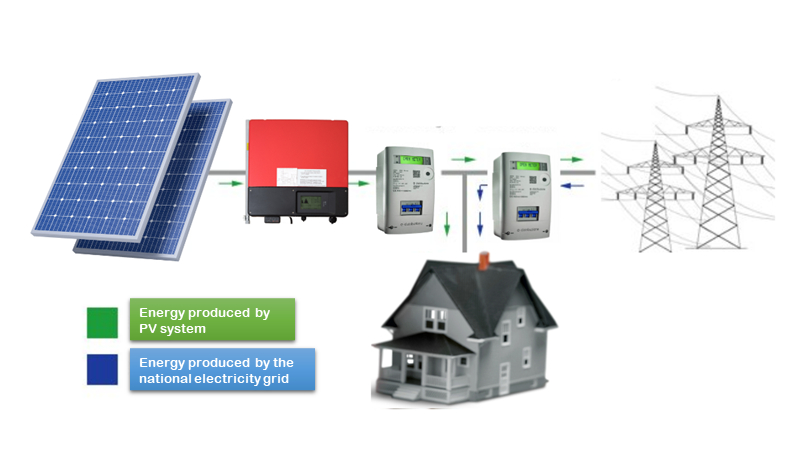 A photovoltaic system is characterized by various fundamental elements:

The photovoltaic generator is the set of solar panels and is the element that converts solar energy into electricity.

These panels consist in small sheets of semiconductor material – the photovoltaic cells – which are connected together and encapsulated to form a larger element, the module.

The panels are in turn connected in series to form a string.

Inverters are chosen according to the panel configuration and characteristics.

A photovoltaic system can work by centralized conversion or by string conversion. The first case shows an application with only one device, while the second demonstrates a scenario with multiple inverters.

Choice of the inverters characteristics and size is fundamental for the system’s overall performance. During composition of the photovoltaic wiring diagram, I would really recommend you try a photovoltaic software capable of activating, sizing and configuring the inverter and all other solar PV system devices.

Generally speaking, field panels are located between the inverter and the generator and are used to parallelise multiple strings.

A possible configuration of a field panel is as follows: 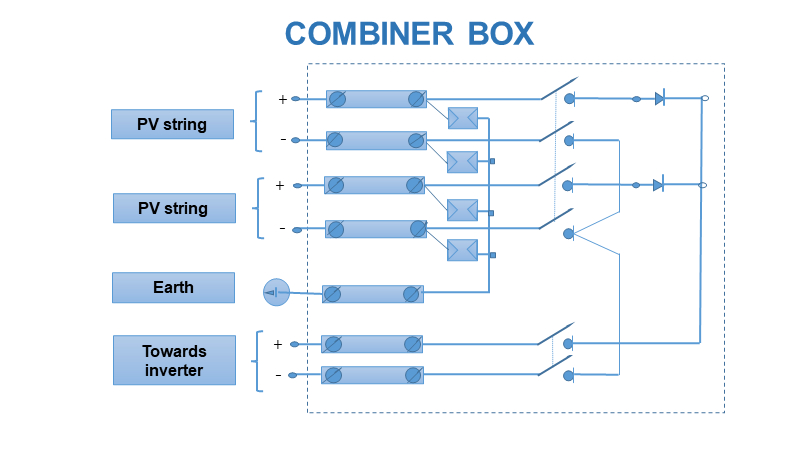 The following image shows a generic diagram of a photovoltaic field with strings placed in parallel in the field switchpanel.

In this switchpanel, with the strings in parallel configuration, the current intensity of each string is simply added up. 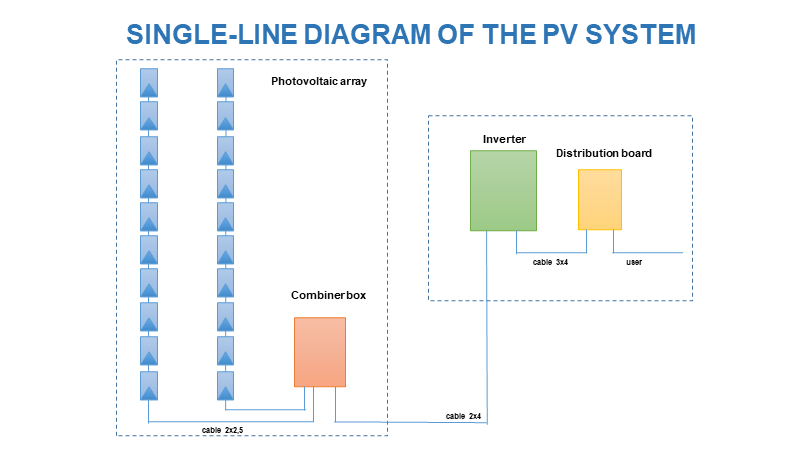 Single-line diagram of a photovoltaic system 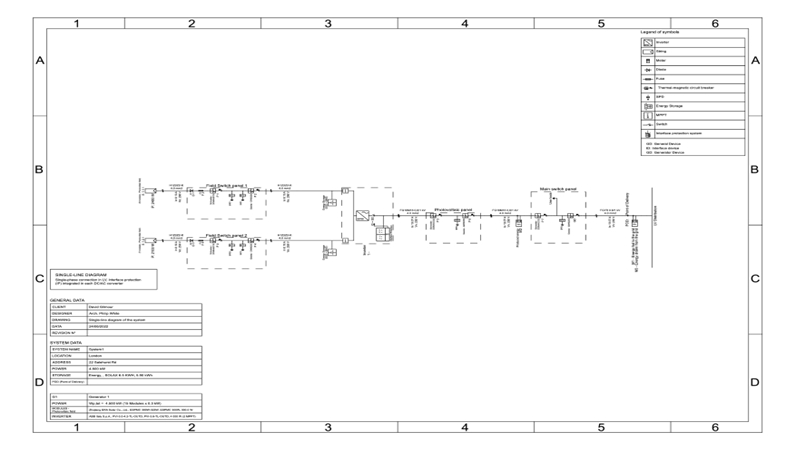 The interface device is generally installed in a switchpanel and detects the electrical voltage: in the absence of a measurable voltage, it disconnects the photovoltaic generator from the rest of the system.

There are two types of Photovoltaic systems:

Grid connected types refer to systems connected to national electricity grid, i.e. systems that allow the energy produced to be fed into the grid and used when needed.

Stand-alone systems, on the other hand, are not connected to the national electricity grid, but have an accumulator that can preserve the energy produced and consume it when the system isn’t working during nightime hours. These storage systems consist of specific batteries.

A stand-alone system has an additional device, the charge controller, which controls the charging or discharging process safeguarding battery life during the various phases.

In these cases, using a photovoltaic system design software will allow you to size and configure the storage system by defining the type of battery and meter. Example of a photovoltaic system diagram

The image represents a diagram for the production of electricity generated from a photovoltaic system. 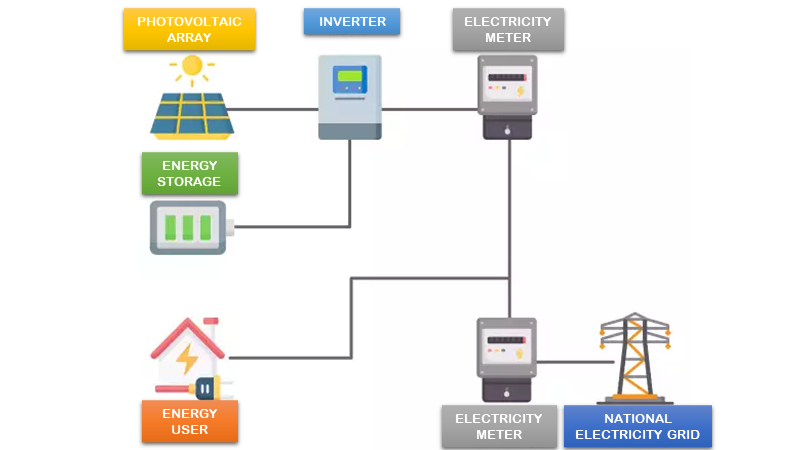 The solar radiation reaches the solar panels, or rather, the photovoltaic generator and, subsequently, the inverter transforms the continuous energy into alternating.

At this point, the energy produced can be exploited in different ways:

This specific model is a photovoltaic system withstorage system connectedto the electricity grid.

In addition, there are 2 counters in the example:

In this process, it is essential that all the components of the system diagram work correctly and efficiently. If there is a shading even on a single module or cell, a reverse current passage could occur, responsible for the hot-spot effect that can cause damage.

Therefore, in order not to risk having operating problems that would compromise the effectiveness of the system itself and cause damage to its elements, I suggest you rely on a photovoltaic software that through operational diagnostics signals any anomalies and design errors and verifies the prescriptions. In addition, using the software you can draw and complete the automatic composition of the photovoltaic system wiring diagram. 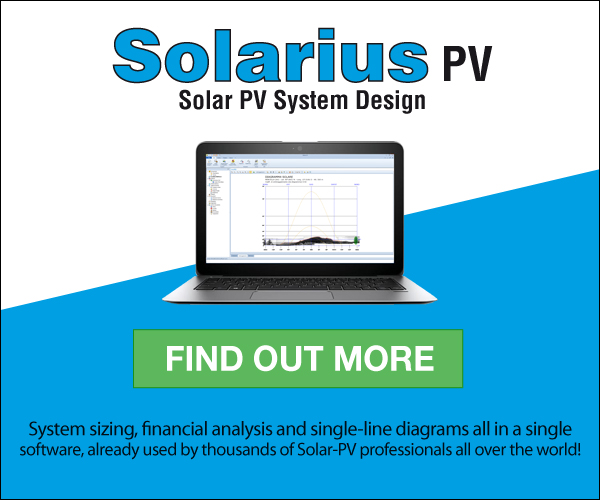 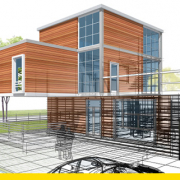 Architectural surveys: what are they for and how are they prepared? 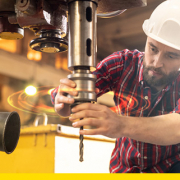 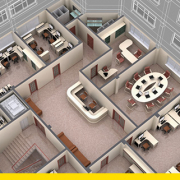 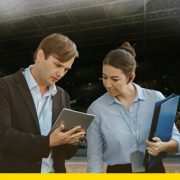 What is sport facility management? 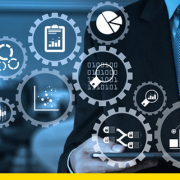 MTTR: what is it and how to calculate the Mean Time To Repair metric 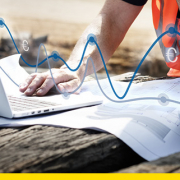